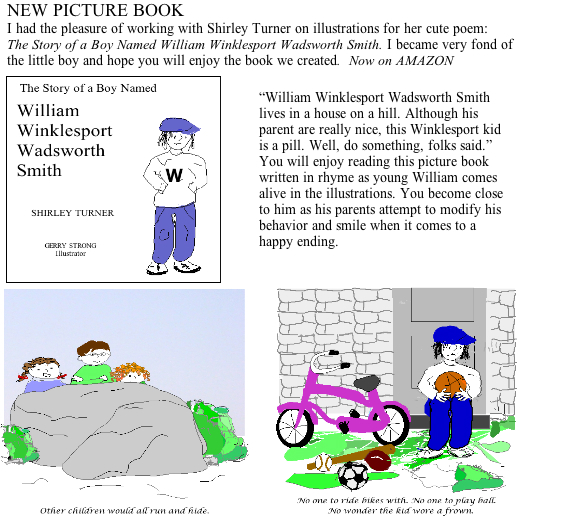 I have to admit it was a challenge doing so many detailed drawings. I have never felt my strength was in drawing, but it was fun and I became very fond of Willie as I told his story.

AFTER MIDNIGHT
A Collection of Short Stories
by Pete Peterson 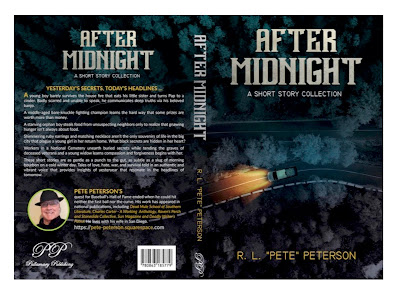 I enjoyed working with Pete on his book. His stories have been in many books. and magazines and have been awarded five stars. It seemed only natural to add stars to their Story Title Page. A slightly larger font size of 12.5 was suggested. so I increased the spacing between lines a little as well. After each story I would send a pdf copy for him to read and okay as I began laying out the next story. We would work our way through the book  with a final read through at the end. As some writers do, he had another source for his cover. I think it all went together nicely.

It is a MUST READ
.
Pete writes with great depth and and feeling.
Set in the deep South in the late 30s to 40s,
I am sure you will find his stories as amazing as I did. 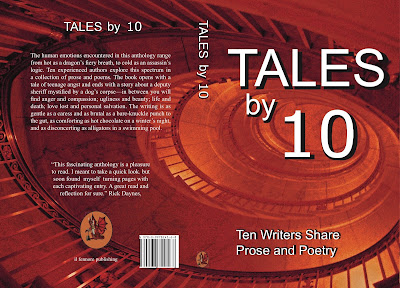 It was a challenge to format this book, working with nine people and a multitude of stories and poems coming to me from numerous documents. First, I created a section with a title page for each writer. These are amazing writers that I share time with and I wanted it to be something they could be proud of.

I laid the stories all out the same, but the two poets each use a different format. The contributors and author biographies also came to me differently. And my contribution had illustrations. This made a nice variety in the collection but most books come from one manuscript and have just one common layout. Positioning the contributors at the beginning and the author biographies at the end, with the poets at 1/3  and 2/3 and me between them helped make it blend together nicely. We chose Times New Roman which is used most often in books for the type.


Rather than using a drawing for the cover we decided on a photo taken by one of the writers. I chose a simple text that I though would attract attention and added shading to the title for contrast. Three of the writers worked on the blurb describing the contents of the book. The background on the logo needed to be changed because it was white, so I added the gold color front the photograph to blend in. All in all, I think it looks good. 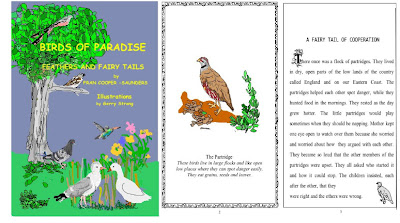 Fran gave me a lot of freedom when I worked with her on both book design and illustration. Her birds parables were a delight and I wanted to give them each their own personalities. One thing she requested was a border on each page.

I embellished the ones with the details of the bird. Then unexpectedly we ended up with pages with no text that just seemed to ask for more birds! Drawing birds needed accuracy, but I still wanted them playful. Lots of fun and an education for me on birds!

IT AIN'T BRAGGIN' IF

YOU REALLY DONE IT..
A 90 year Adventure
by Betty Brown Simm 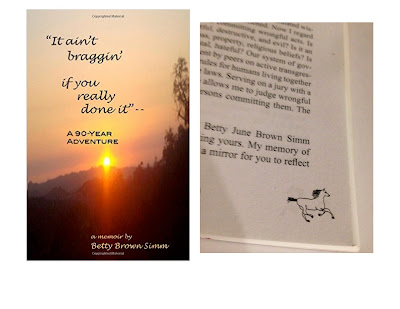 Betty was a delight to work with, 94 years young and full of life. From greeting Lindbergh in Paris in the 1920's after his lone airplane trip across the Atlantic, to meeting gangster Al Capone to serving as secretary to Pat, President Nixon's wife and surviving two California fires, she has done it all.

Using the script form of writing for the title gave it a natural feel and she thought the sunset, bright and bold, also represented the timing of her years. She chose the interior layout of the text and I suggested a separate page to announce each chapter.

Just for the fun of it, I added a little horse running from page to page. Betty and family had two Horse Farms during her life where they boarded horses and her daughter taught riding. 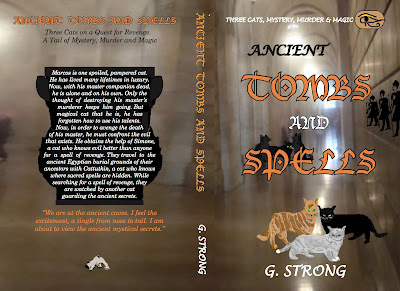 This was fun to work on. Three cats are important so I had to get them pictured for the reader to see right away. And for the cover, I wanted them focused in a light, so after many attempts, this photo was perfect.

The font used for the title needed to represent the kind of story that was being told. In this case, history and magic. I thought " LUCIDA" was a good choice. And a hieroglyph at the top-a clue to the fact that a lot of the story is set in Egypt.

The back is as important (maybe more so because readers will find the synopsis of the story). I decided to include another clue to the story by using the urn shape for the synopsis. Readers may not catch these clues, but I think using them adds to the overall look of the design keeping it connected to the story.

Inside the book, I chose to divide it into four sections. The story led me to this decision because the locations changed. I added a full two page spread in black and white for each section representing each of these locations. Here is Saqqara, Egypt, one of them. 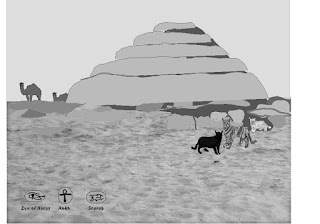 Although illustrations aren't necessary in books for older children and adults, I think it is a nice addition, giving each part of the story more importance. I combined the use of drawing on photo as I had on the cover.


I love reading the stories authors write and using my imagination along with their ideas to bring their book to life for their readers!
happy writing, gerry 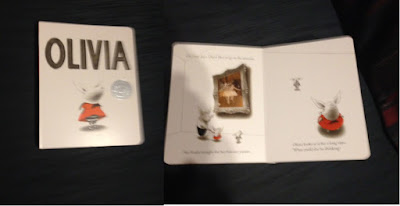 One of my favorite books. I love everything about it: Olivia, the little pig, is delightful. The story is simple, one a child can relate to. The black and white with just a touch of red adds glamour and elegance as do the famous paintings shown in their true form. Totally fun and educational. It couldn't be more perfect. I wish I could claim it for mine! It is everything I think a picture book should be.